Former national boxing champion Billy Graham is captivating. He is loud, passionate and funny. You can’t help smile when he speaks. He lights up the room with his enthusiasm.  It’s easy to see why the young men of Naenae love him. Back in 2006, Billy converted the Salvation Army Hall into what is now known as a hugely successful boxing academy. But the emphasis is not on creating champion boxers. It is on giving the young men of Naenae a future, a focus and something to believe in.

In this buzzing, vibrant Boxing Academy, in the tough, working-class suburb of Naenae, young men’s lives are changed for the better.  Most of these boys entered with nothing: hungry, no self-belief, little hope. But they have left as confident young men looking forward to a bright future. And this place is working, local police say youth crime is down 30 percent, and a Massey university study has confirmed the academy’s amazing ability to turn troubled boys’ lives around.

In his new book Making Champion Men Billy shares his journey and tells, with passion and humour, how to work the same miracles in your home or community. He tells, through experience, what boys need: encouragement and kindness, discipline and rules. They need male role models and to learn the consequences of their actions. Most importantly, they need someone to believe in them.

Making Champion Men reveals the secrets behind one of the most remarkable success stories in New Zealand youth work and teaches some important lessons. The lessons have been learnt the hard way: Billy Graham had a tough childhood, in trouble with principals and police, until he found boxing. He went on to become a national boxing champion, and then a globally recognised motivational speaker. 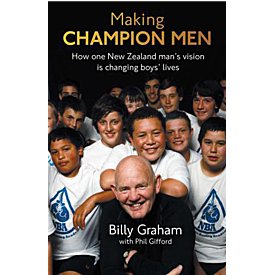 Andrew Becroft, Principal Youth Court Judge, is a fan of Billy’s.  He has written the foreword in the book and has this to say:

Boys seek Billy out. He has the gravitational pull that most challenging young boys find hard to resist. They are in his orbit, he can work his magic. Amongst other things he is a challenger, a disciplinarian and a humorist. He has enormous reserves of energy. He gives 100 per cent to working with young boys. The boys genuinely love him and warm to his transparent, straightforward and no-nonsense honesty.

Billy, and the others like him, are the unsung heroes of our community. They faithfully put in the hard yards with unflinching determination. It is not glamorous work. Few people ever see it. But it makes a difference – a community based difference – that government departments, policy analysts and even judges can never match.

Phil Gifford, award winning sports journalist, broadcaster and long standing friend of Billy’s helped to write Making Champion Men. He says the book is not only a fascinating story, it is much more than that. “It is a blueprint for how to do the sorts of things that Billy has done. This book is very practical. I hope people will buy it and use it as a guide to help change young people’s lives.”

At the book launch at Vodafone’s head office in Auckland last week, Billy talked about his quest to set up other academies throughout New Zealand based on the same formula as he has used in Naenae. He knows he has the ingredients to make it work elsewhere, but he will need support from people around the country to make it happen. He will be seeking passionate, positive individuals who want to see a change in their communities.

Billy says,  “We think we have found a remedy. It is so ridiculously simple and we know it is working. It’s not rocket science, it’s basic common sense. I tell my boys at the boxing club that manners do count, looking at people and shaking hands and saying hello with a smile on your face, does work. Remembering people’s names is really important, getting back to people will open doors for you. I have learnt in my life, that in order to be able to make things happen, you need people around you in order to achieve.

“In my life I’ve had a crack at everything. Been a butcher, forestry worker, even a teacher and I have been able to seek out the right people, get them to back me and to help me make things happen. There are people that have encouraged me in every area and I know the value of having the right person in my corner. If I can get the book in everybody’s hands with any luck they will say, ‘I could do that’, and hopefully they’ll give it a try.” 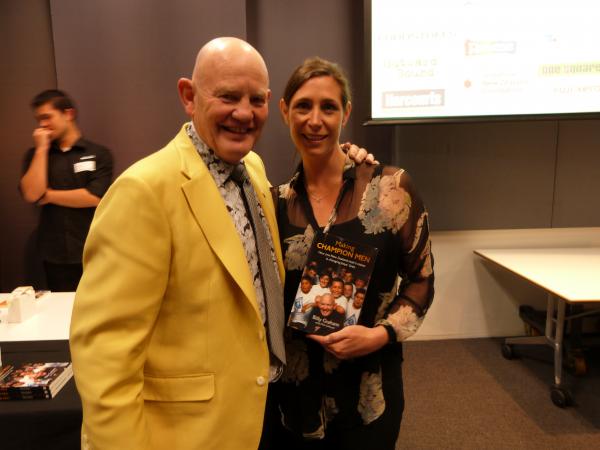