The Naenae Boxing Academy was formed in 2006 by Billy Graham, an internationally renowned boxer with NZ and Australian light welterweight boxing titles to his name. The Academy was a life-long dream for Billy who was inspired by his own experiences of growing up as a troubled young boy in Naenae, a suburb of Lower Hutt, Wellington. Taken under the wing of Dick Dunn, New Zealand’s legendary boxing coach, Billy learnt from an early age to box without getting hurt and to have self respect and confidence, to listen, absorb wisdom and work incredibly hard towards a goal.

Billy wanted to help kids just like him, so he and his wife Kerri took out a mortgage and bought the former Salvation Army headquarters in Treadwell St, Naenae. They moved in to the church and set up the Naenae Boxing Academy. Billy and Kerri have largely funded the Academy themselves, but they also receive funding from many organisations and businesses. The Tindall Foundation, via the Nikau Foundation, helps to pay the fees of some of the young boxers who can’t afford to pay the subs. The Academy has also been supported by many others including the Vodafone NZ Foundation, Rotary, Harcourts, Resene Paints, Fuji Xerox, Cookie Time, as well as many trust funders and local businesses alike.

Billy’s gym is adorned with boxing memorabilia and photos from all over the world. There are gloves of world champions and a very special boxing bag that he has had since he was a young boxer. He had the bag signed by some of the world’s most famous boxers including Sugar Ray Leonard, Floyd Patterson, Joe Frazier and Muhammad Ali. On the bag it reads…To Billy Graham, good luck when you get your own gym.

From talking to Billy you are instantly drawn in by his relentless enthusiasm. You can see the commitment and passion of this man, who is considered by many as a father figure, teaching young men what acceptable male behaviour looks like. The Academy gives these boys a sense of identity, belonging and self worth – and they all have Billy Graham to thank.

Billy describes how his dream has become a reality and how he is using it to help so many young men in Naenae…We have around 80 boys a week aged from 11 to 18 come to the gym where they learn life-skills through the disciplines of boxing and physical fitness. You should see the passion in this place when it is full with these kids. They are unstoppable. It’s magic to see. 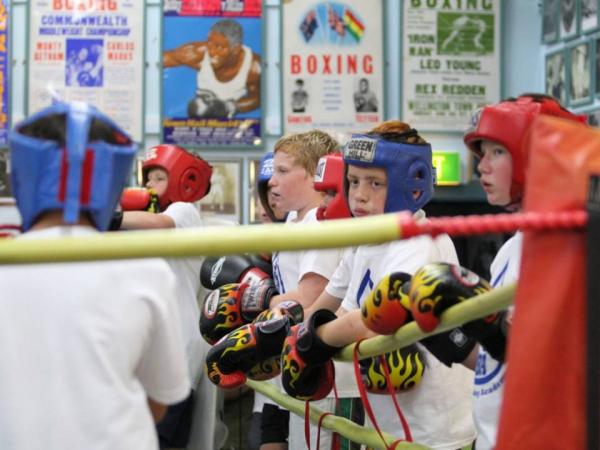 The boys have often been referred to us by their schools, the police or juvenile courts. Like me, some of them have difficulties with dyslexia; others have Attention Deficit Disorder/Attention Deficit Hyperactivity Disorder, learning and relationship difficulties, drug and alcohol abuse. Many have multiple issues going on in their lives so Kerri and I try to keep our emotions separate, but it is easier said than done.

We have very high standards here. We expect the lads to stick to the rules – no alcohol, no involvement in drugs, no smoking, no swearing, no iPods, no beanies, caps, hoods or patches. Regular attendance and personal training is compulsory. We teach the scientific side of self-defence rather than how to be fighters. Our aim is to turn the young boys in to healthy young men. We work on attitudes and self control. We teach them respect for their families and how to understand and care for their bodies. We instil humour, self esteem, respect, good citizenship and communication skills. We give them skills to cope with the stresses and challenges of everyday life. We’re always telling them to have a dream, to share it with others and not to be afraid to ask for help. For many, this is the only positive environment they experience and it’s the only exposure they have to encouraging and optimistic role models.

The boys take part in other activities such table tennis, group games, singing, public speaking and learning a musical instrument. We feed the kids too. For some of them it will be the only decent meal they’ll have all day. It’s heartbreaking at times.

We take a wider approach to address the boys’ issues by working with teachers and police and we are available for them 24 hours a day. We also run weekly classes for ‘at risk’ students from local schools, visiting schools to talk to pupils about motivation and lifestyle choice. We provide one-on-one counselling for at risk youth and family counselling for the boys’ families.

We are also having an impact on the local Naenae community. There has been a significant reduction in graffiti in Naenae and in association with the Hutt City Council we instigated and helped with the repainting of retail shops in Naenae at no cost to the retailers. This really helped improve the retail image around the town.

The police officer in charge of Naenae Community Policing Centre is hugely supportive and complementary of the programmes we run. He believes the Academy has a positive impact on Naenae and the wider community and has been an important contributor in the reduction of crime across the board in the Naenae area.

We also receive positive reports from local schools confirming major changes in the lives and attitudes of the boys we work with.

Here’s what two of our boys have to say:

Geoffrey, 16 years, has been with us since 2011: “Naenae Boxing Academy has made me a better person. It helped my confidence go up. Billy is a great coach. He’s teaching me good boxing skills. He’s done a lot for me and other boxers. He takes good care of us. He disciplined us through boxing and made me a better man.”

Jarrod, 20 years, has been with us since the beginning: “The Naenae Boxing Academy has been a second home for me for six years and coming to the gym is usually one of the highlights of my week. I have gained many skills here, not only in the ring but also in my personal life. And to top it off I have made heaps of friends.”

One of the young men who has now left the gym wrote the following words of gratitude to Billy. His parents have become members of the Academy’s exclusive supporters ‘250 Club’ in recognition of how the Academy was instrumental in changing the life of their son….

I sincerely thank you with all my heart for all that you and the gym has done for me. You have given me confidence and skills that will be of great importance throughout my life. You gave me the confidence to walk into a room with my head held high and be able to shake hands with those I don’t know and do know.

I thank you for the patience and the many hours you have put in to helping me and those like me. …All of the three and a half years of your teachings I shall carry with me for the rest of my life.

Individuals can support the ongoing success of Naenae Boxing Academy by becoming a member of its 250 Club.  Contact kerri@teambilly.co.nz, www.naenaeboxingacademy.co.nz