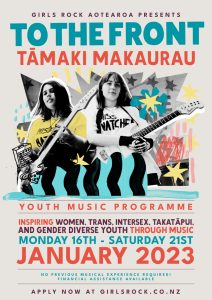 To The Front Tāmaki Makaurau 2023

Girls Rock! Aotearoa has been inspiring women, trans, takatāpui intersex, and gender diverse youth form bands, build instrument skills, and write original songs since 2018. We are proud to announce that To the Front Tāmaki Makaurau programme is back for 2023!

To The Front Tāmaki Makaurau 2023 will be held between 16 and 21 January. Once again the programme will be hosted by our key sponsor, SAE Creative Media Institute Auckland, allowing us access to their state of the art recording studios and equipment. Applications for participants, mentors, volunteers, and interns open September 14th.

Why does To The Front exist?

Girls Rock Aotearoa launched with the kaupapa of fostering inclusivity in our musical communities by starting at the grassroots; with our rangatahi.

A recent report released by Massey University researchers found that “more than two-thirds of women in the music community (70.1 per cent) reported experiencing bias, disadvantage or discrimination based on their gender – seven times the rate of men (10 per cent).”

By creating an inclusive, fun, and supportive space for our young people, we’re helping to build a brighter future for music and musicians in Aotearoa.