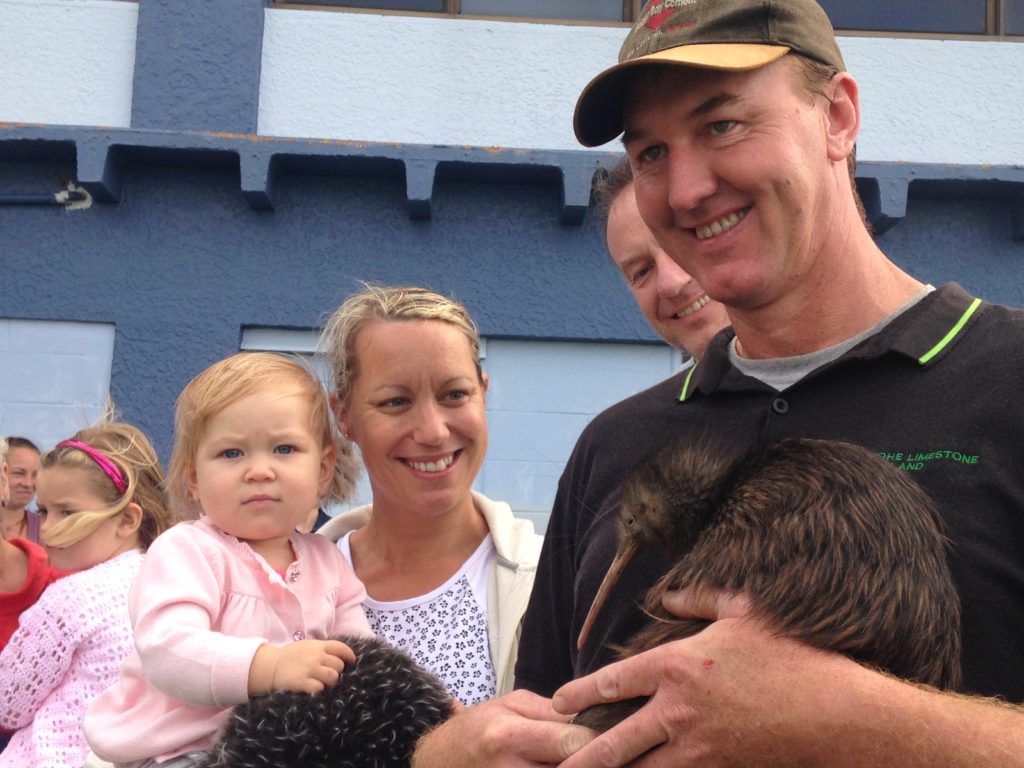 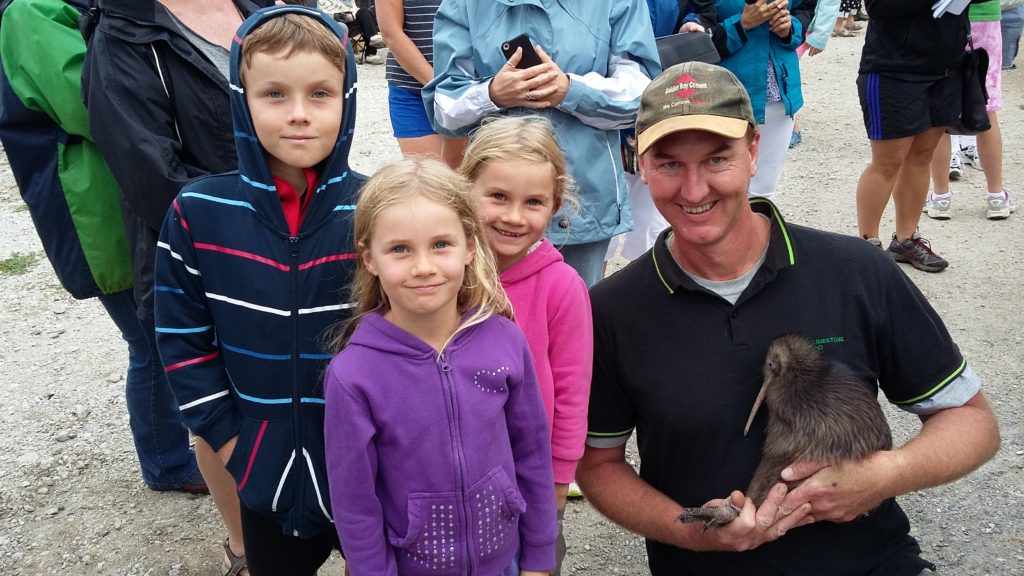 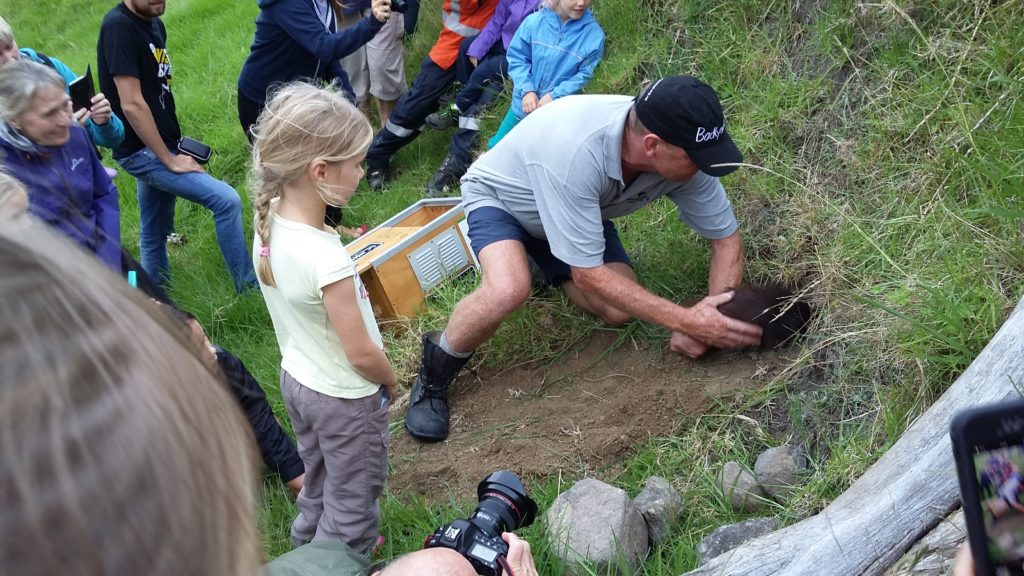 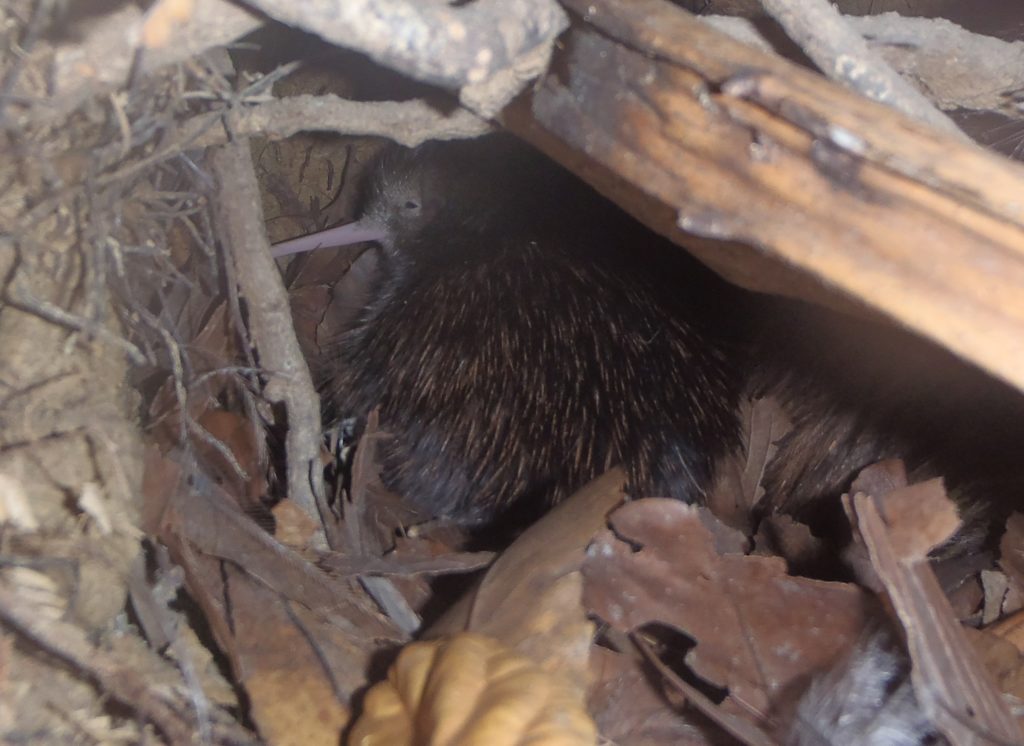 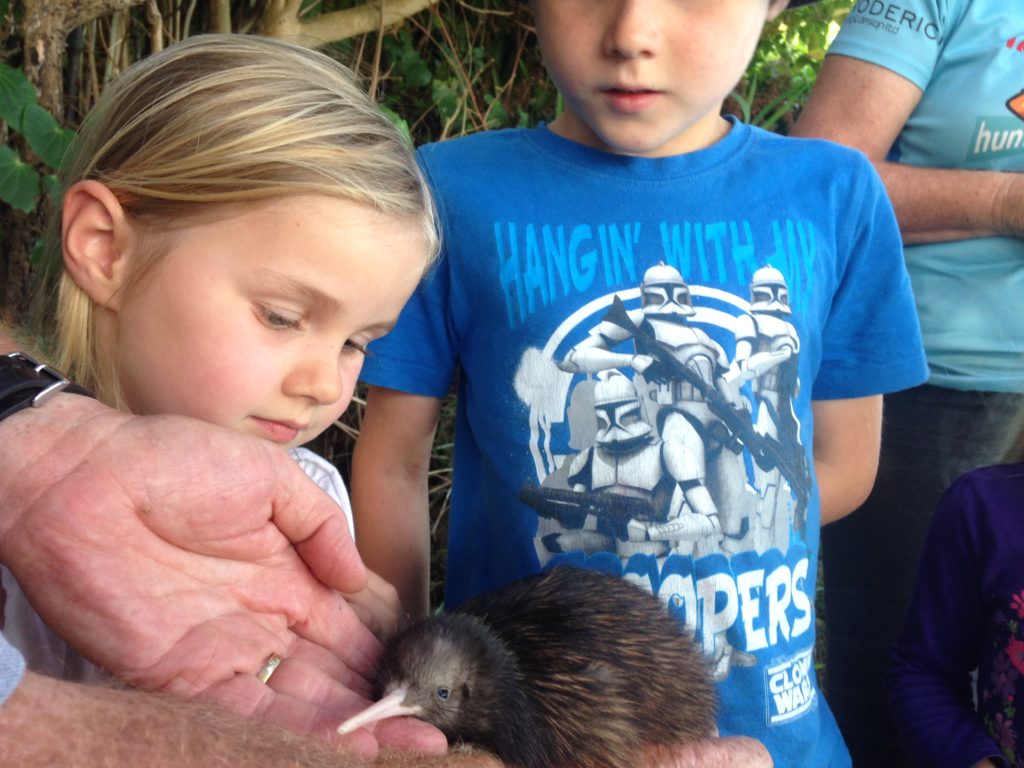 Another two Kiwi have graduated from their island crèche at Matakohe Limestone Island and were released to their new home on the mainland at Whangarei Heads late last month.

If you live in Northland, you might be lucky enough to see them cruising local backyards as they roam free along the Kiwi Coast Corridor which stretches over 175km from Bream Head to Hihi.

Thanks to the dedication of over 60 community conservation projects, the gorgeous, fluffy pair named Wiggle and Stevie were released at nightfall into pre-dug burrows at Bream Head.

During the day Wiggle and Stevie wowed the 239 people who came meet them. Locals felt privileged to be part of this special close-up kiwi encounter, and when the kiwi visited Parua Bay School, the children were star-struck!

Todd from Backyard Kiwi, Adam from Bream Head Conservation Trust and Bernie from Matakohe Limestone Island, explained to the crowd the uniqueness of kiwi, their vulnerability to introduced predators and how we can all help them thrive.

Both Wiggle and Stevie inspired and excited everyone who met them. They took their important role as ambassadors for all Kiwi very seriously, and just by being there they won hearts and educated minds about the importance of animal pest control in the area.

Ngaire Tyson is from Kiwi Coast, a collaborative project working to increase kiwi numbers along Northland’s east coast. She says giving people the opportunity to see a real kiwi it makes them all the more passionate to protect them.

“As kiwi ambassadors Wiggle and Stevie are literally helping to save themselves and their species from dwindling to extinction. Events like this are a great way of getting important messages across. Local dog owners were encouraged to continue to walk their dogs on leads and tie them up at night.

“The children at Parua Bay School were so delighted to meet Wiggle and Stevie and left the classroom determined to keep the kiwi that live amongst them in their backyards, farms and lifestyle blocks safe from harm.”

As wild birds, Wiggle and Stevie were only handled by Accredited Kiwi Handlers certified by DOC. At all times the Kiwi are kept calm and safe. If they ever showed signs of stress they were be returned to their safe boxes.

Wiggle spent 18-months in the kiwi crèche. He is now the stoat-fighting-weight of 1660gms and can be safely released to mainland.

Says Ngaire, “As they were released they wished long and fruitful lives by the onlookers. The kiwi can go off happy and safe knowing that they have touched the hearts of over 200 people. It’s my hope that everyone who was part of this treasured kiwi experience has a firm commitment to ensuring Wiggle, Stevie and their fellow kiwi continue to thrive on the Kiwi Coast.”

Kiwi Coast is a collaborative initiative that links over 60 community-led conservation projects, iwi and hapu, forestry companies, government agencies and organisations with the shared vision of increasing kiwi numbers along Northland’s east coast. The Kiwi Coast corridor stretches over 175km from Bream Head to Hihi.

Kiwi Coast is one of the first flagship projects selected for support by the innovative Reconnecting Northland programme.  This initiative is trialling a large landscape approach to environmental restoration with a focus on connectivity. Kiwi Coast’s linking of all the kiwi care groups along the east coast of Northland is a fine demonstration of how much more habitat and biodiversity restoration can be achieved and sustained using this larger scale collaborative approach.  Along with Foundation North and HSBC Bank, the Tindall Foundation is a major supporter of Reconnecting Northland.