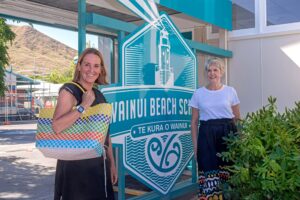 What started as a chance meeting by Wainui Beach School (WBS) ex-Board of Trustees Chair Ailsa Cuthbert in Vietnam has led to the establishment of the WBS endowment fund at Sunrise. Sunrise Foundation is the local Community Foundation in Gisborne that raises funds from donations and legacies and invests them in perpetuity (forever) for the long term (endowment funds).

Ailsa, who travels to Vietnam regularly for work, met Hien Nguyen in a shop next to her office in Ho Chi Minh City. Hien not only sells bags but teaches other women how to make them, which they do mainly at home at night, as a second income when their children are asleep.

Ailsa says she popped in to look at the brightly coloured bags and ended up forming a friendship with Hien. Over time Ailsa has learnt about her life and family and was keen to support her work and the social enterprise initiative which helps women in impoverished circumstances by giving them a way earn extra money.

Having brought a back a few bags back to Gisborne for gifts it became clear there was a market for the them and close friend Dianne Renolds suggested they sell them as a fundraiser for WBS.

Ailsa says “schools always need to raise extra funds, and there’s only so many sausage sizzles fundraisers you can do! The bags were hugely successful, fit into the Gisborne lifestyle of the family trips to the beach, farmers market or bach. We sold 600 and used the money to seed the WBS fund at Sunrise.”

“The bags are very strong, last for years and are a useful way to get rid of single-use plastic, at the same time creating benefit in the community where they were made and now for WBS. I love the circularity of this project”.

Nolian Andrew, WBS principal, says “there is a perception that schools like WBS are well funded”.

“But the reality is, the higher decile the school is, the less government funding they receive. This means we rely on a lot of support from our community to raise the funds we need to run our school.”

Ailsa hopes the WBS community will support the new fund and help create change for the school in perpetuity.

“It is important the fund grows as it has the potential to offer opportunities for all children at WBS in the future”.

We would love to stay connected and keep you up to date with news and stories from The Tindall Foundation.

You have Successfully Subscribed!