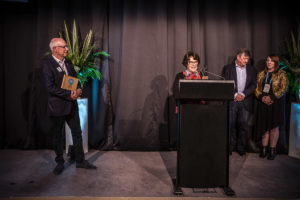 Eight Awards were presented to New Zealand individuals and organisations at the Philanthropy New Zealand Awards 2019. These Awards recognise their dedication to making a positive difference in Aotearoa.

From emerging leader, Michelle Wanwimolruk of The Borrin Foundation, to the those who have dedicated a substantial part of their lives to philanthropy, Sir Stephen Tindall, Margaret, Lady Tindall and Iain Hines.

Stephen and Margaret said they were delighted and humbled to receive this special award. “Giving is something close to our hearts. Our family, including our five children, get great joy from supporting New Zealand families and communities and working alongside amazing organisations to protect and enhance our natural environment. One of the most rewarding things for us are the wonderful, high-trust relationships we have developed over the last 24 years. It is a pleasure to work in partnership with organisations and communities who are making positive and lasting change for our people and country.”

Michelle Wanwimolruk, The Borrin Foundation
Kiwi Invest Emerging Leader Award
The Award recognises the contribution of someone new to the sector (less than three years) who is making a significant impact on philanthropy or grantmaking.

Auckland Foundation, Women’s Fund
Vodafone Innovation in Grantmaking Award
Showcases an organisation that has successfully launched an innovative response to the challenges of being a great grantmaker.

Stephen and Margaret Tindall founded The Tindall Foundation (TTF) in 1994. Today, TTF supports over 700 organisations a year, giving annual donations of around $10 million to help families, communities and the environment.

Following the success of The Warehouse float in 1994, the family decided it wanted to share some of the financial rewards with others for the long-term benefit of Aotearoa New Zealand. The idea was to offer a hand up and not a hand out to families and communities, a philosophy that continues to this day.

Since its first donation in 1995, TTF has given away over $175 million. The Foundation gives more than just money — it provides support, skills, connections and communication that help organisations and communities to achieve their goals

Iain Hines runs the Peter McKenzie Project, which seeks to help create an Aotearoa New Zealand where all our children, young people and mokopuna flourish, and to reduce the number of children and families living in poverty.

In April 2017, he vacated the role of Executive Director of JR McKenzie after over 20 years in the position. Prior to this, he was a social worker, and manager of a community based organisation working in the mental health field.

Iain was awarded a Churchill Fellowship in 2002 to study aspects of philanthropy. He’s also been a member of the Ngāi Tahu Fund Committee, and a Board member of Philanthropy New Zealand, spending ten years in each of these roles.

Iain continues to strongly support the J R McKenzie Trust’s vision of ‘a socially just and inclusive Aotearoa New Zealand’, and is both curious and determined about how philanthropy can help achieve that.

RAW has a mission to surround disadvantaged women emerging from an incarcerated environment with all the skills, confidence, and support they need to turn a life of crime into a life of promise. The charity was formed to help break New Zealand’s intergenerational cycles of offending, domestic and sexual abuse, poverty and under-education that exists for growing numbers of disadvantaged women and their families.

The RAW Charity was established in 2014 by Annah Stretton and the Annah Stretton Foundation. RAW has developed a comprehensive and successful integration support model for a selected group of women offenders who demonstrate a genuine desire to change. This model involves the provision of safe accommodation, mentoring and community partnerships that enable each woman to gain an education, find meaningful employment, rebuild relationships with children and family, and ultimately achieve emotional and financial prosperity

The organisation’s kaupapa strongly supports Te Ao Māori as it culturally strengthens the New Zealand health system having employed, qualified Māori in meaningful employment. It also positively influences the health system services and approaches from a Māori perspective, so it is safer for Māori to utilise services available creating healthier community.

Since the 1990s, the JR McKenzie Trust has been working to bring the principles of Te Tiriti into its strategic thinking and grantmaking. This commitment found its first formal expression in the founding of the Trust’s Te Kāwai Toro committee in 2003, following an analysis by the trust of its funding, which found little was going to Māori initiatives.

Te Kāwai Toro was established ‘to increase the volume and effectiveness of the Trust’s contribution to Māori communities and lead proactive Māori development’. Te Kāwai Toro acted as a way of bringing the principle of partnership to life, putting Māori and Maori interests at the heart of decision making about grants to support Māori initiatives, and making the trust more culturally welcoming to Maori by progressively deepening trustee and staff understanding of tikanga Māori and te ao Maori. The long-term result of this initiative has been a significant positive shift in Māori funding from the Trust, and Maori representation in the governance of the trust. The impact of Te Kāwai Toro was such that the JR McKenzie Trust was awarded the coveted international Funding for Indigenous Peoples Award in 2014.

Michelle has been involved in establishing the Borrin Foundation, the latest significant addition to the New Zealand philanthropic sector. Given the Borrin Foundation is constrained to fund only “legal research, education and scholarship”, Michelle drew on sector knowledge to help the Foundation’s leadership board to determine its strategic focus.

Michelle’s work helped the Foundation to look beyond reactive transactional models of grantmaking, to a grantmaking approach that would proactively seek to make a difference to the lives of New Zealanders through the law. This resulted in the Foundation choosing to focus on two key areas – criminal justice (the Foundation has drawn attention to how New Zealand has the second highest incarceration rate in the Western world) and family law.

The Women’s Fund is a new giving concept in NZ, placing a gender lens on philanthropy and putting power and outcomes firmly in the hands of women.

The Auckland Foundation Women’s Fund has served to fill a niche in NZ grantmaking and paved the way for others to follow. The Women’s Fund is a community of generous women who work together to create opportunities for women and girls.

The Women’s Fund to date (March 2019) has generated 585 donations from 86 donors, enabling one round of awards so far, in which $20,000 was distributed to 10 recipients. The Women’s Fund has enabled grantmaking with a proud gender lens.