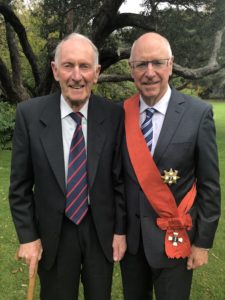 Stephen with his father Bob

Our Co-Founder, Stephen Tindall, received a very special honour at Government House last week, Knight Grand Companion of The New Zealand Order of Merit for services to business, community and the environment.  The Tindall family were there to support him including his 91-year-old father Bob Tindall. It was a great day and a wonderful recognition of his work over many years.

Stephen has contributed to the community, business, international trade and commerce, and the environment in New Zealand for more than 40 years.

At the investiture ceremony, at Government House in Auckland, a citations was read out, and the Governor-General, Dame Patsy Reddy, presented Stephen with his medals.   He received a badge, in the form of a cross in white enamel set in silver-gilt (gold) with, in the centre, a medallion comprising the New Zealand Coat of Arms in coloured enamel, within a circle of green enamel bearing the motto of the Order and surmounted by a Royal Crown. Since the Royal Warrant was revised in 2009, the badge may be worn in three ways: suspended from a wide ribbon or sash over the right-hand shoulder, passing to the left-hand side of the waist, and resting on the left hip; from a neck ribbon; or from a ribbon bow worn on the left shoulder. 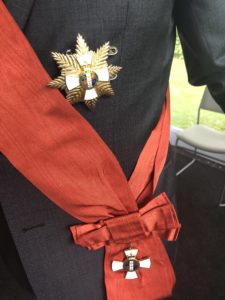