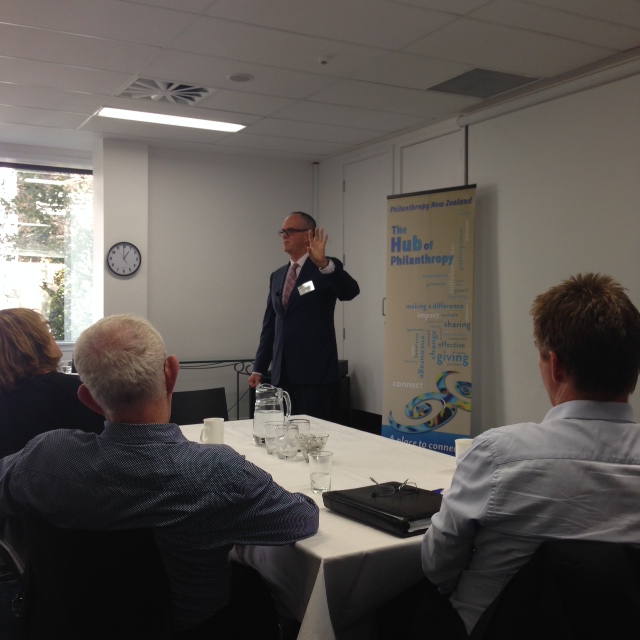 I attended Philanthropy New Zealand’s Family Philanthropy lunch on 3 March in Auckland. The lunch was an invitation only event aimed at budding and experienced philanthropists and grant makers.

Allan English, Founder of hospitality equipment company, Silver Chef  and English Family Foundation, based in Queensland was speaking about his journey from ‘Success to Significance’, and David Todd, Trustee and family member of The Todd Foundation spoke about growing up in a philanthropic family.

For Allan, spending money on material things was of little interest and he started to lack motivation for business and question what it was all for. However, when he realised he could use money to impact the lives of others in significant ways, he found his purpose and many opportunities opened up for both him and his business and this meant he could support a greater number of people.

English Family Foundation has three main areas of focus; Global Giving, Southeast Queensland Matters and The Social Innovation Fund. Global Giving supports poverty alleviation programmes in developing countries. Within this area, the Foundation hopes to fund 1,000,000 people out of poverty by 2020. Within Southeast Queensland Matters, they are working with marginalised communities that need special care. Within The Social Innovation Fund, the Foundation supports young entrepreneurs to work on social issues they are passionate about.

What I found interesting about Allan’s talk was how he managed to change the culture at Silver Chef so that people were so engaged in working for a company that was attached to a Foundation with the vision of funding 1 million people out of poverty. It shows that people want to do good and want to work for socially responsible companies when they have a chance to.

The Todd family are a well known in New Zealand for their company Todd Corporation. Their history begun 1885, when Scottish immigrant Charles Todd opened a wool scoring business in Central Otago. Mark Todd spoke about his journey of growing up in a philanthropic family. Although the Todd family were wealthy, as a child, Mark remembers growing up in a very normal kiwi family. The eldest of 21 grandchildren and the fifth generation of the Todds, Mark said that his parents and grandparents instilled in him values of generosity and kindness.

The Todd Foundation is a private family foundation based in Wellington New Zealand. It provides funding to New Zealand organisations that contribute towards its vision of  ‘inclusive communities where all families, children and young people can thrive and contribute’. Mark spoke about Todd Foundation’s funding streams; the General Fund, for one and two-year funding for initiatives for families and children, Partnership Funding, for five years untagged plus capacity building (by invitation only), Special Focus Fund, to address specific issues as required. In 2014 this will support for Canterbury’s ongoing earthquake recovery, and Tertiary Awards and Scholarships to University and Polytech students.

I think the Philanthropy lunch went well. It was particularly good to be able to meet new people who are thinking about starting a charitable trust, and who are in the early stages of doing so. As the second generation member of a philanthropic family, I think it’s really important that people in family philanthropy are able to meet and talk about giving and philanthropy in a broader sense. It’s too often we have our heads down working, and forget that there is a whole world of philanthropy going on out there. There is a small but engaged community of givers here in New Zealand, and I feel that it will only continue to grow.