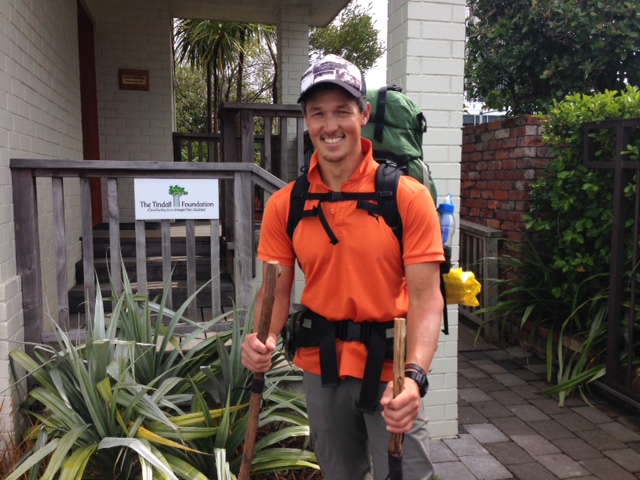 Friend of The Tindall Foundation, Andrew-Dean Lum stopped by today for a break during his long walk from Cape Reinga in the North of Aotearoa to the Bluff in the south.

The Te Araroa 3ookm trail was officially opened in 2011 and takes people approximately three to five months to walk.

Andrew-Dean said he is loving the walk so far and hopes to finish mid-January 2015. He has been surprised and touched by the kindness of strangers who have let him sleep in their sleep outs and spare rooms, although most of the time he camps in the bush in his tent. He told us how beautiful the countryside is and that the toughest part so far was the stretch along Ninety Mile Beach.

Andrew-Dean is walking for the joy of it and to raise money for Starship Foundation via Givealittle, which you can donate to if you wish. View his profile here.

Good luck Andrew-Dean! We look forward to more photographs along the way.

Te Araroa isnt just for long walkers – whether you’re getting your first taste of Te Araroa, or only have a day to spare – get out and enjoy these stunning Day Walks.

Bream Tail Mangawhai Walkway – Northland
This is an excellent beach and cliff-top walkway through farmland and bush areas. The high quality grading of the track has made it one of the top attractions in the Whangarei area. You will enjoy outstanding views of Bream Head, the hen and Chicken Islands, and all the way down to the Hauraki Gulf including the Mokohinau Islands and Great/Little Barrier.

City to Sea – Wellington
A rich and varied walk from one end of Wellington city into the surrounding suburbs and hills and then to the rocky shores of Wellington’s south coast. Wonderful views of the Cook Strait and Kaikoura Ranges.
Click HERE for the brochure of this walk.

Outlet Track/Glendhu Bay Track – Otago
The track follows the Clutha up to its origin at the Lake Wanaka outlet where you’ll enjoy wonderful views across the lake to the Southern Alps. The track then heads west on the Waterfall Creek track, built some years ago but now incorporated into Te Araroa. It heads along the Wanaka lakefront, offering stunning views over the lake to the mountains, before passing Edgewater Resort and heading out of town. On the Millennium Track section of the trail, there are some small climbs, then on the Damper Bay track the trail goes up and over some big bluffs, including a couple of decent hill climbs and corresponding steep downhill sections. Once the track reaches Damper Bay, the going becomes easier.

Tongariro Alpine Crossing – Whanganui
The Tongariro Alpine Crossing in Tongariro National Park is one of New Zealand’s most spectacular tramping tracks, and is considered the most popular one-day tramp in New Zealand. The Tongariro National Park is a World Heritage site which has the distinction of dual status, as it has been acknowledged for both its natural and cultural significance. The crossing passes over the volcanic terrain of the multi-cratered active volcano Mt Tongariro, passing the eastern base of Mt Ngauruhoe which can optionally be climbed as a side trip. The 19.4-kilometre (12.1 mi) walk is renowned for its barren yet beautiful “moon like” volcanic landscape, unusual geological features, visible volcanic activity and views of the surrounding countryside below. The track reopened in 2013 following the Mt Tongariro volcanic activity.

North Shore Coastal Walk – Auckland
The picturesque coastline of Auckland’s North Shore is a magnet for locals and visitors, with its string of sheltered bays and white sandy beaches. The North Shore Coastal Walk begins at Long Bay Regional Park and weaves through the beaches and suburbs of ‘the Shore’ and out to Devonport. The route is accessible at all tides, following cliff top tracks, pedestrian shortcuts, steps and footpaths. You don’t have to be a hiker to enjoy this walk, and you can choose to do the whole trail, or just sections of it, with numerous entry and exit points.

Wakatipu Trail – Otago
This track spans the Wakatipu Basin between Arrowtown and Queenstown on a mix of footpath and walking track interspersed with small sections of gravelled road margin. Along the way it links the Millbrook Track, the restored Historic Shotover Bridge and the Frankton Walkway. View the luxurious Millbrook Resort, cross the famous Shotover River then enjoy the spectacular views of The Remarkables as you enter Queenstown alongside Lake Wakatipu.