Christchurch’s eye catching Pallet Pavilion has been hugely successful this summer, so far bringing together over 4000 people from all over the city to enjoy live music, outdoor cinema, games, twilight markets, and the chance to relax in the secret garden.

Built by a volunteer army over six weeks in late 2012, the Pallet Pavilion is a temporary architecture project that functions as a community space and venue for events. Over December and January more than 40 events were hosted in the Pavilion.

The brain-child of Gap Filler, the Pavilion is one of the organisation’s creative urban regeneration initiatives which started in response to the September earthquake, and revised and expanded in light of the more destructive February 22, 2011 quake.

Over this long hot summer, the Pavilion has been helping to address the city’s need for new small-to-medium sized venues, after the loss of clubrooms and community halls that were destroyed by the earthquakes. Located on the prominent site of the former Crowne Plaza Hotel, the Pavilion has been drawing people back into Christchurch city, supporting central businesses and promoting the central city as a place for experimentation. 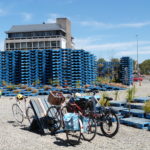 The Pavilion is open daily as a public space and hosts organised events most evenings. Thursday to Saturday it is used largely as a venue for live music in a city that has lost many live music venues. For the rest of the week it will be available to the community for a small hire fee.

A visually engaging and dynamic space, it is built from over 3000 wooden pallets and is a showcase for the possibilities of innovative transitional architecture in a city that is ready to embrace new ideas. The blue exterior conceals a secret garden, with landscaping creatively integrated into the walls and stepped seating. The selection of plants have been blooming over summer.

The Pavilion was designed by emerging designers, supported by established professionals, and built from loaned, reused and donated materials using volunteer, professional and community labour.

Events will continue until the end of April and deconstruction of the Pavilion is scheduled to begin in May. 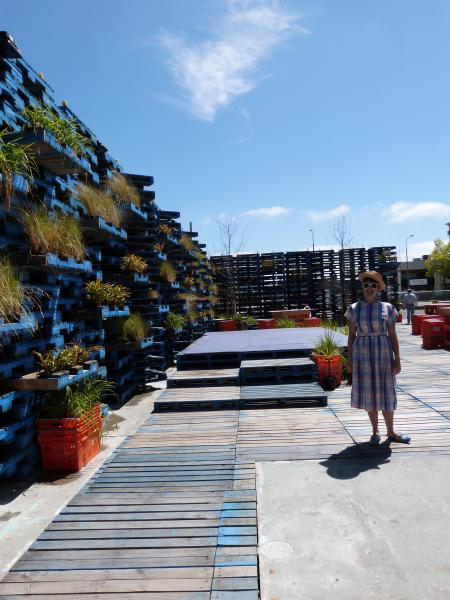