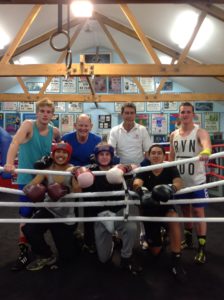 This weekend Billy Graham, founder and inspirational coach of the Naenae Boxing Academy, jets off to the US with five young men on a training and life skills trip of a lifetime. The boys, who have been chosen for their leadership potential, will train at US Air Force Academy in Colorado Springs followed by further training in Cincinnati, Ohio, where they will be lucky enough to visit the Muhammad Ali Centre, visit longtime boxing manager and promoter Buddy LaRosa’s new dream boxing academy and meet the current World Lightweight & Welterweight Champion, Adrian Broner.

The five boys on the trip are David Graham, Harry Scaife, Geoffrey So’e, Keegan O’Kane-Jones, Kizsa Waiwai. They will be accompanied by Billy and another of their boxing coaches Graham Clifford (photographed).

Here Billy talks about the upcoming trip (January 12 – 28) and why it will be such a life changing experience for these young leaders.

David, Harry, Geoffrey, Keegan and Kizsa were all selected because they show strong leadership qualities and because they are such good role models at Naenae Boxing Academy, where they have all been training hard in preparation for the trip. We’ve taken boys on a trip like this twice before and those kids have achieved highly; one becoming Head Boy of his college, another becoming Deputy Head Boy of his College and the other an ambassador for Outward Bound.

These boys have also been selected because they can box well. The standard is very high in the States and they will need to keep up. Not all will be champion boxers, but they all have the desire to succeed. We strongly believe that this experience could help shape their lives for the better by showing them that the world can be their oyster if they set themselves goals and go about achieving them one at a time, staying away from things that will drag them down.

While staying at the US Air Force Academy the team will train with the cadets twice a day, morning and afternoon – these are both physical and motivational classes which are out of this world. We also get to mingle with the cadets which is great.

We’ve been invited to the Olympic Village in Colorado Springs, which is just half an hour away. This will be inspiring for our boys because, not only will they see where past athletes have come from, but they will meet quite a few of them at the Olympic Village.

Then we head to Cincinnati, Ohio, where we will go to the Muhammad Ali Centre which is a two day excursion and visit Ali’s home where he grew up in ‘slumsville’.

The boys will also get to work out and train with World Light-Welterweight Champion Adrien Broner.  We are invited guests to the new multi-million dollar boxing stadium in Cincinnati – the dream of legendary boxing coach, manager and promoter Buddy LaRosa who we met on our 2010 trip.

The relationship with the US Air Force began 30 years ago. Ed Weichers, head coach of the US Boxing Academy was a personal friend of my coach Dick Dunn. I’ve had a 30 year relationship with him and this is my seventh trip to the US Air Force Academy. Ed has represented the USA as an Olympic Coach several times. As well as this, the US Air Force Academy has won the combined Military Services Championships under his leadership, more times than any other coach. So he is quite a hero in his own country and is also my friend. Lucky boy I am! He is a great contact and loyal supporter of ours.

We’re going to have a great time with some awesome people and this will be a life-changing experience for our team, and a great encouragement for our younger boys back at home giving them something to aspire to in the future.

This incredible experience has been made possible because of the generous support of Vodafone NZ, W. Fullerton Investments and Hawridge Developments Ltd. Sincere thanks to all of them.