It was a privilege to learn more about the fantastic work both charities are doing to help vulnerable and at-risk people in the community.  Life for many in New Zealand is simply getting tougher.  Families are under huge pressure due to the increasing levels of poverty, violence, addiction and isolation. It was both heart-warming and moving to see the significant difference Lifewise and PGFNZ are making in the lives of so many Kiwis.

We first visited the Lifewise offices in Glen Eden to learn more about the community organisation’s programmes and services. We heard about the fantastic work the team is doing to get more vulnerable children into early years education, its work with foster children and their caregivers, and the innovative way it is helping homeless people of Auckland get off the streets and into safe, warm accommodation.

We were blown away by the passion and dedication of the Lifewise staff.  Alli Munt, Early Childhood Education Manager, spoke about the new supported playgroup that has just opened in Glen Eden in the local Methodist Church hall.  We were delighted to hear about a new Early Childhood Education centre which will be built in Massey West with funding from the Ministry of Education . Once open, any children from the local community will be able to attend the centre.

We heard from Tiaria Fletcher, Service Manager, for Family Services who described the organisation’s foster care services for children unable to live with their families because the home is not a safe place or suitable environment. She shared stories of some of these children and the other family support services Lifewise runs including parenting courses, family counselling, social work, respite care and homecare services for the older people and those living with disabilities, helping them to live independent lives.

After hearing about the huge success of Know Your Neighbours campaign and how it has contributed to a stronger, more connected and more inclusive neighbourhoods across New Zealand, we went with some of the team to Lifewise’s Merge Café in K Road. The café is staffed by homeless people to feed homeless people, alongside office works and the general public.

There are over 100 people sleeping rough on the streets of Auckland’s CBD on any one night. Lifewise shut its traditional style soup kitchen in 2010 because it felt it was outdated, segregating and isolating. It opened Merge, a public café where anyone can buy a decent meal for $3. There’s also a simple breakfast of cereal, toast and tea for $1. This approach treats people with dignity and choice. It not only feeds people, but provides employment and training as well as other on-site services, including support and social workers, CADS (Community Alcohol and Drugs Services), probation officers, WINZ, ACOS (Assertive Community Outreach Services) and Housing NZ.

The last two years have been very successful. Over 100 long-term homeless people have been housed and Lifewise has assisted them to address the issues which have contributed to them being homeless. 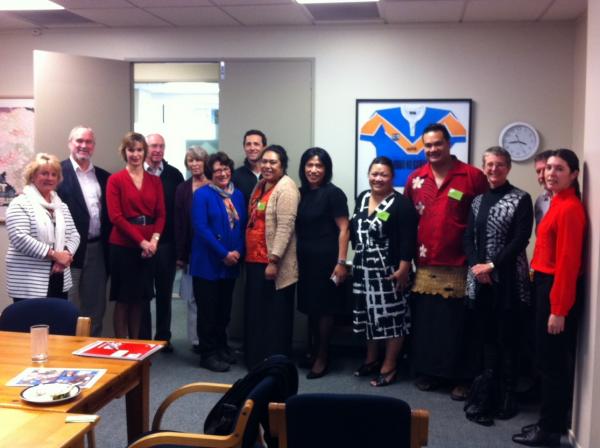 In the afternoon we visited the office of PGFNZ to hear about their work to help those with addictions and build healthy communities free of gambling. PGFNZ is a not-for-profit organsiation and the largest treatment provider for problem gambling in Australasia. But PGF doesn’t just help those with gambling addictions, it provides programmes for people with food and other addictions too.

We heard from the Mapu Miaia team, PGFNZ’s Pacific Unit. Mapu Maia means to come in and take shelter or refuge. These dedicated people provide culturally appropriate service for Pasifika. The team works with Pacific communities educating and raising awareness about the harm that gambling (and other addictions) can cause and provides counselling and support for Pacific families in Auckland that need help with problem gambling.

It was exciting to hear about one of the major success stories the Mapu Maia team highlighted – the Off the Couch (OTC) Initiative. Losa Patterson, counsellor and educator at Mapu Maia, took part in OTC with her daughter when she realized it was imperative for her health that she lost weight. After successfully losing a lot of weight, she decided the programme would be hugely beneficial for others so Mapu Maia became the addiction specialist within the OTC programme providing:

Off the Couch participants are referred from Procare GP’s and word of mouth because of their obesity and other health issues. Once involved, Mapu Maia then helps them to deal with their addiction issues. The key for success is engagement with the participants. Losa trains alongside all participants (both men and women) and gains trust and credibility from them. Once trust is obtained, everything else falls into place.