The Tindall Foundation’s Next Gen fund is proud to support the work of this awesome organisation, The Virtuoso Strings Charitable Trust. It provides free music lessons and education to young people in Cannons Creek Porirua, including three community orchestras and the opportunity to tour the country performing.

The Platinum Award at the NZ Community Trust’s Chamber Music Contest was taken home by Wellington string quartet, Sixteen Strings. Toloa Faraimo, a member of Virtuoso Strings, was the leader of the winning group. He was joined by fellow musicians Sharnita Sungsuwan, Peter Gjelsten and Emma Ravens to win the top prize.

The Virtuoso Strings Orchestra was formed in 2013 by Elizabeth Sneyd and Craig Utting. They were in awe of the natural talent in the community, especially among Maori and Pasifika students. Now run as Virtuoso Strings Charitable Trust, they see more than 200 students from Porirua East every week, through the Orchestras, the after-school sessions and the Virtuoso-Strings-in-Schools programme.

Liz and Craig believe that music education has far reaching impacts, and should be accessible for all. It works create a thriving and supportive environment nurturing the talent of all young students, helping them develop strong peer and community connections and build an enduring sense of self-worth.  Whole families become involved, helping with every aspect of Virtuoso Strings, from preparing suppers, setting the stage for concerts and rehearsals, and running the Committee.  Some of the students even refer to Virtuoso Strings as their “orchestra family”.

The NZCT Chamber Music Contest has been showcasing New Zealand’s young musicians for more than half a century and many contestants go on to pursue music professionally. It is the only contest of its kind in the world.

Liz says, “It was such a huge journey for everyone. We got much further in the competition than we ever anticipated – surviving five rounds at the district, regional and national level to get down to the final six. It was wonderful that we could take a group of our Mums to support their children. It was a truly memorable occasion – not the least to see our musicians play their hearts out, but also be recognised in a way they have never been before.”

The contest is an iconic secondary school musical event held annually throughout the country. It is the perfect opportunity for young musicians, regardless of standard of experience, to compose and to perform chamber music and strive towards excellence.  More than 400 groups entered in 2019.

You can listen to the winning performances on RNZ. 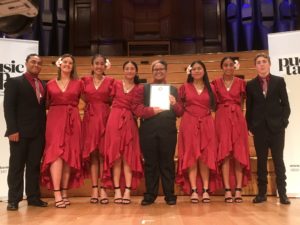 The winners of the People’s Choice Award, Virtuoso Stings Octet 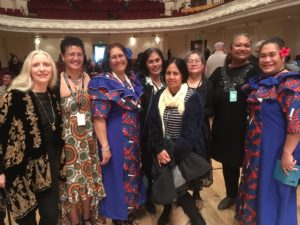